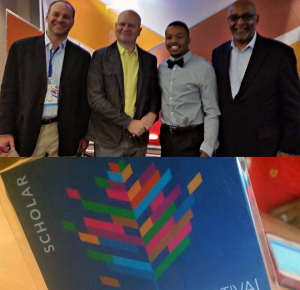 This past June, Xavier Jennings, a YouthBuild graduate from 2009 and current Program Specialist at MHYC, spoke at the Aspen Ideas Festival in Aspen, CO. The forum is an opportunity for leaders including the Aspen Institute, The Seattle Foundation and the Bill and Melinda Gates Foundation to discuss issues and emerging ideas in today’s society.

As the council president of VOICES, an advisory group on youth initiatives at YouthBuild, Xavier participated in the “(Re)Connecting America’s Youth” panel. This session discussed how to greater support academic and employment opportunities for youth. They noted that unemployment for America’s young adults has reached its highest levels since the Great Depression. Xavier not only contributed his own experiences as a YouthBuild graduate, but also a unique perspective to the issue as one of the younger members on the panel.

“I think we get so used to people telling us messages and placing labels on us; whether it be from probation officers or teachers saying we’re not going to make it or we’re going to fail this class. We get so caught up in those messages that we forget to tell our own story and figure out what we want to do,” said Xavier. “[G]oing onto college and post-secondary education institutions would give us power and control over our own lives.”

Xavier was invited back after attending the festival in 2012. Hear a clip from his previous panel and read his bio on the festival’s website.

Also be sure to check out Xavier’s insightful video discussing the impact of education: